When Black women are punished for being the best — •

Simone Biles, widely considered the greatest gymnast of all time, has made a career of mastering skills that no other woman dares to try. In fact, she’s done this five times. She will likely perform three of the four skills that are named “The Biles” at the 2020 Summer Games in Tokyo, as well as her new vault, the Yurchenko double pike, which will then become the fifth Biles. She has advanced the technical side of gymnastics in unprecedented ways, yet two of her skills are undervalued by the Code of Points.

In other words, she will not get adequate credit for their difficulty in competition. The Federation of International Gymnastics (FIG) claims it wants to dissuade lesser gymnasts from trying such difficult skills and sustaining injuries. But it’s beginning to look like a pattern in subjective, largely white-dominated sports: the policing of Black women’s bodies, limiting how far ahead of the field they can actually be.

This injustice made me think of an earlier pioneer: Surya Bonaly. I was 12 years old when I watched Bonaly do a backflip in the 1998 Games. I was six weeks into my first round of skating lessons, and at that point, she was the only figure skater I’d seen on TV who looked like me. When Bonaly replaced a planned triple lutz with a backflip, and seconds later, finished her program with her back to the judges, she thrilled the audience and the TV commentators. But she was penalized for performing the illegal skill and dropped out of medal contention.

The official reason given by the International Skating Union as to why backflips are illegal is because they are landed on two feet, and therefore can’t be considered a jump. The backflip she does is a step-out, meaning that she splits her legs while flipping upside down. One leg lands in front of the other, and she quite literally “steps out.” In her post-Olympic career, Bonaly would hold her one-foot landing and pause before jumping into a triple salchow. It takes a perfect landing — the right speed and momentum, and the right placement of body weight — to successfully execute a triple jump from the landing of any previous skill, let alone a backflip, and I don’t think I’ve ever seen Bonaly miss. Yet, despite her obvious talent, Bonaly was consistently underscored by judges.

Biles, like Bonaly, is also a dark-skinned Black woman in a sport that is traditionally defined by a Russian balletic aesthetic, where a thin straight body line is the goal. Both women are powerfully built and naturally muscular, yet neither possesses the long, lean elegance of former champions such as Nancy Kerrigan or Nastia Liukin. Neither moves like a ballerina, though toward the end of her career, Bonaly tried to incorporate a more classical aesthetic into her skating, choosing music by composers such as Antonio Vivaldi and Camille Saint-Saens. Biles, on the other hand, doesn’t seem too concerned about appealing to a more classical sensibility. Her current floor routine is — quite fittingly — set to “Tokyo Drift” by the Teriyaki Boyz (from The Fast and The Furious: Tokyo Drift soundtrack), and she brings in choreographers from Dancing with the Stars. It’s important for her to have fun, or she won’t do it at all.

Biles’ stature in gymnastics is about more than just the difficulty of her moves, though. American commentators repeatedly praise her near-flawless technique. Her flexibility and form (straight knees, legs together, toes pointed) are impeccable, and in these ways, she very much meets the old-school aesthetic. The open-ended scoring system in her sport rewards difficulty over everything else, meaning that a gymnast such as Biles can be dominant because she is so far ahead, technically speaking. In a sense, she has freed gymnastics from the notion that only a wispy girl who looks like she belongs at the Bolshoi can be a champion.

She is the face of the sport, and in her wake, a lot more girls with faces and bodies like hers are rising through the ranks. There are her contemporaries, such as fellow Olympic trials competitor Shilese Jones or her Olympic teammate Jordan Chiles, who also trains with Biles at World Champions Centre. And then there are the younger girls such as Skye Blakely and Konnor McClain, who are already eyeing Paris in 2024.

This is also why the trend of undervaluing her skills is so troubling. Experts say that the Yurchenko double pike is valued approximately 0.2 points below where it should be. The same thing happened in 2019 at the World Artistic Gymnastics Championships, when Biles debuted a double-twisting double-back dismount in her balance beam routine.

It’s important to note that Biles is not the only female gymnast to face this scrutiny. In 1999, Russia’s Yelena Produnova debuted a handspring double front vault — a move so dangerous that when asked if she would ever attempt it, Biles reportedly told The New Yorker, “I’m not trying to die.” Much like today, the FIG was concerned about lesser gymnasts attempting the vault, and though it awarded it the proper difficulty, it scored it far too low in competition, seeming to deduct for errors that weren’t there, and Produnova competed using the vault only once.

It turns out there was no need to actively dissuade women from attempting the vault — only five women have executed it in the years since.

Of this trend, Biles said at the U.S. Classic, where she first competed the vault earlier this summer, “They had an open-ended scoring system and now they’re mad that people are too far ahead and excelling.” It seems like a double standard: Push the sport ahead, but not so far ahead that you’re in a league all of your own. Watching Biles and remembering Bonaly, I think of the days when my mother drove me to skating practice at 6 a.m., constantly reminding me that I had to be twice as good to accomplish half as much. In many ways, Bonaly was twice as good.

Tonya Harding was heavily rewarded when she became the first American and second woman to land the triple axel, and in recent years, ladies figure skating is dominated by a crew of Russian teenagers who’ve pushed the technical boundaries of the sport so far that they’re doing the same quadruple jumps as the men. Like any sport, figure skating wants to reward innovation. Like in gymnastics, athletes who create a new skill eventually have it named after them, hence the salchow, the lutz and the axel. But Bonaly’s innovation was singular, and previously unimaginable, and she has never been rewarded for it. Her backflip remains banned. There is no skill in the sport that bears her name.

If Biles competes in her new vault in Tokyo, it will be named after her — there’s no question. But if the difficulty score remains where it is, it sends the message that when you are Black, you shouldn’t strive to be so much better than everyone else, even if you can be.

I can’t help but think about the policing of Black women’s bodies in the context of sport. How sport, for so many of us, when we start as kids, is supposed to be a free place — a limitless place, a place where we can excel in our craft, without concern about the racism and sexism so often inflicted upon us everywhere else.

It was on the ice where I finally felt free enough to embrace my queerness. But it’s also impossible to look at the way Bonaly was treated in figure skating and not consider race, and it’s impossible to look at the way Biles is evaluated and not consider her race as well. Would they have been repressed in the same ways if they were white women? And would their unprecedented skills be rewarded more appropriately if they were men, and the governing bodies carried no overarching concerns about the safety of their skills? 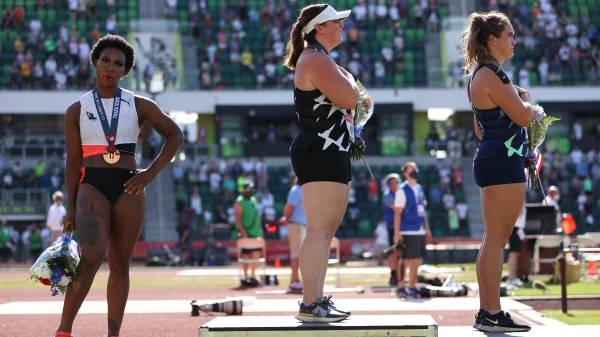 Biles will be at the Summer Games, and she’ll be as dominant as she always is. She will epitomize faster, higher and stronger. She will break records and reestablish herself as the greatest of all time, and I will revel in her Black excellence. I just hope she does all her difficulty, despite how it’s been valued, simply because she can.

Denne Michele Norris is a Black Trans writer living in Harlem. Her work has been supported by The MacDowell Colony, Tin House, and the Kimbilio Center for African American Fiction and more writing can be found in McSweeney’s, American Short Fiction, and ZORA. She co-hosts the critically acclaimed podcast Food 4 Thot and is at work on her first novel.

Colin Powell broke many boundaries within the army and in civic life with dignity,…

An Artist Challenge by Miguel Luciano – •