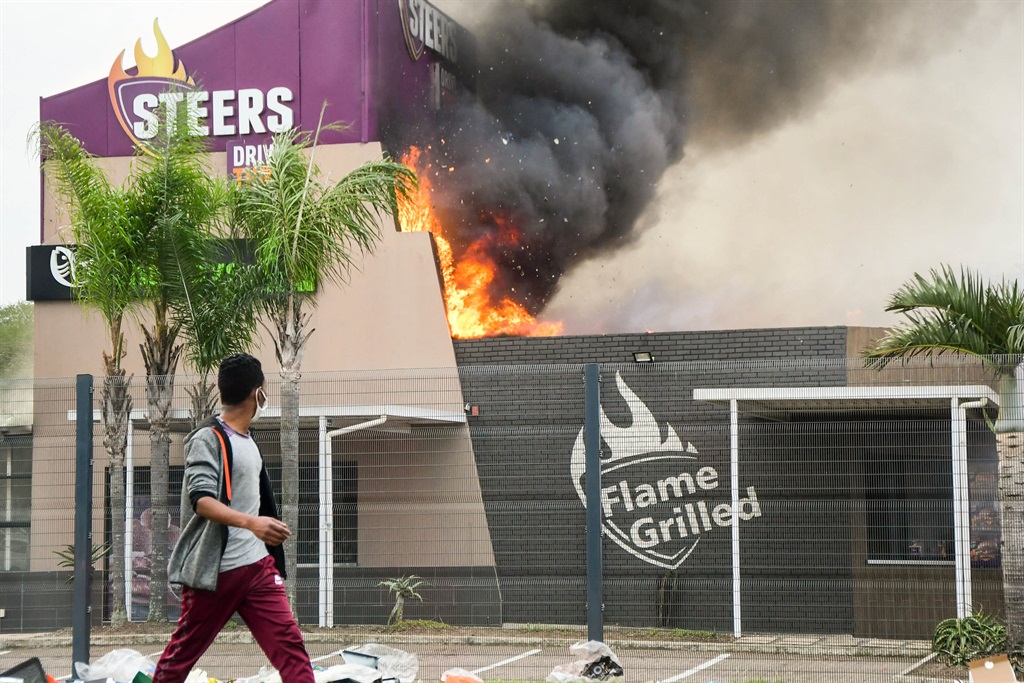 Steers in Umgeni Road in Durban was set alight during unrest.

South Africa’s neighbours felt the shockwaves of days of unrest and looting, prompting some to rethink their economic reliance on the regional power.

In Namibia, the effect was immediate. In commenting on the country’s response to the Covid-19 pandemic, health minister Kalumbi Shangula said the unrest in South Africa threatened Namibia’s oxygen supply.

“The oxygen is being procured from South Africa and brought into Namibia by trucks. The current events in South Africa may pose a threat to the seamless supply of oxygen to Namibia,” Shangula told The Namibian newspaper.

The unrest also affected burials, with the majority of coffins imported from South Africa.

Namibia was experiencing a third wave of infections, recording an average of 681 cases over the past seven days, according to the World Health Organisation.

For President Hage Geingob, it was a wake-up call about Namibia’s reliance on South Africa for basic goods.

“We depend on them and have not tried to be independent from them. We are still getting basics, food stuff, like potatoes from South Africa. Small things we can produce ourselves. It is going to teach us that we ought to produce things ourselves,” Geingob said during a briefing on Covid-19.

A lesson on underlying issues

For observers, though, it was a warning about what could happen if Namibia failed to address the same socio-economic challenges that created fertile ground for South Africa’s unrest.

The Namibian newspaper published an editorial warning that the country’s stagnant economy, unresolved issues on land and the unequal provision of quality education and healthcare could ignite the same rage and looting.

In Zimbabwe, South Africa’s anger could be attributed to unequal land ownership, according to the state-owned daily The Herald.

“Peace, which is increasingly eluding the rainbow nation and other parts of the world, does not come cheap,” wrote Political Editor Fungi Kwaramba.

It is an expensive compromise that recognises the existence of diversity without necessarily gouging out each other’s eyes. Such a compromise is steeped in the land as a mother to all, equally offering the tangibles and intangibles in its belly.

Similarly, the jailing of former president Jacob Zuma divided opinion, seen as “a demonstration of some exaggerated notion of the rule of law”, Fungi added, quoting a Zimbabwean academic.

Lesotho’s minister of small business and leader of the Basotho National Party Thesele Maseribana, urged South Africa to allow a SADC mission to intervene, for the sake of regional stability and trade.

Last week, Botswana issued a warning to its citizens travelling to South Africa, particularly to Johannesburg and Durban.